Anything that decreases the risk of a gap opening up between expectation and reality can only be a good thing.

“Prediction is very difficult, especially if it’s about the future.”

I have been reading about predicted eCommerce trends for the year ahead. There are even some brave souls who have made predictions about what will happen in the new decade. Maybe they’re hoping we’ll all have forgotten what they said if or when they are proved wrong in the future.

Most of us want to know what the weather will be like tomorrow. If there were no apps, no weather channels, no satellites, no official weather forecasts at all, what would you do? You would probably look up at the sky and think “it will probably be like this tomorrow.”

Many of us have the very same attitude toward our health, the economy, and plenty of other things – we assume things will stay broadly the same. Even if there are forecasts of stormy weather, we look up at clear blue skies and think how unlikely it is that a storm will disrupt our view.

Why? Because we trust what we can see. We trust in our own experiences and in our instincts. And that word – trust – is going to become increasingly important this year. Possibly even this decade. It’s not much of a prediction, really. It would be more interesting if I predicted that in 2020 we will all stop paying attention to trust. But that’s not going to happen… I predict.

Whether it is the so-called first mile, the last mile, or any of the miles between, trust can turn a first-time customer into a repeat customer and a lack of trust can turn a full basket into an abandoned one. Everyone knows this, surely. Yet plenty of businesses get it wrong.

The easiest way to kill trust is to let someone down. It applies in a romantic relationship and it applies in a professional one, too. If you set someone’s expectations at a particular level but fail to meet those expectations, a gap opens up – the gap between the promise and the reality, and it is this gap that trust falls into.

It’s a bit like when you get an email from a retailer telling you about a flash sale on things you would really like to buy, but only if they are heavily discounted. You click and arrive at a webpage. Well, that’s what’s meant to happen. But if you an eleventy billion other people all arrive at the same time, the site falls over. You may try to refresh the page a few times, hoping things will correct themselves. But you won’t stay very long and will eventually leave, unhappy. And maybe next time you get one of those emails you might just delete it instead.

Virtual waiting rooms and queuing systems, like those developed by the Danish company Queue-it, offer one approach to solving that problem. According to Queue-it (which counts Harvey Nichols, the London Symphony Orchestra, and Winkelstraat among its customers) 79% of shoppers who receive poor website performance will not return to buy. This matters to anyone who doesn’t want to give shoppers an excuse not to buy or a reason to never return, of course. Shoppers’ behaviour is becoming more nuanced, more subtle, and that means it is harder to predict. If you can’t predict when your servers might be overloaded by traffic, how can you be sure your site won’t fall over?

Camilla Ley Valentin, one of Queue-its co-founders, says this was visible between Black Friday and Christmas. “Online holiday shopping traffic is peaking earlier and lasting longer. Sudden surges in holiday shoppers are technically complex and create a lot of uncertainty.” 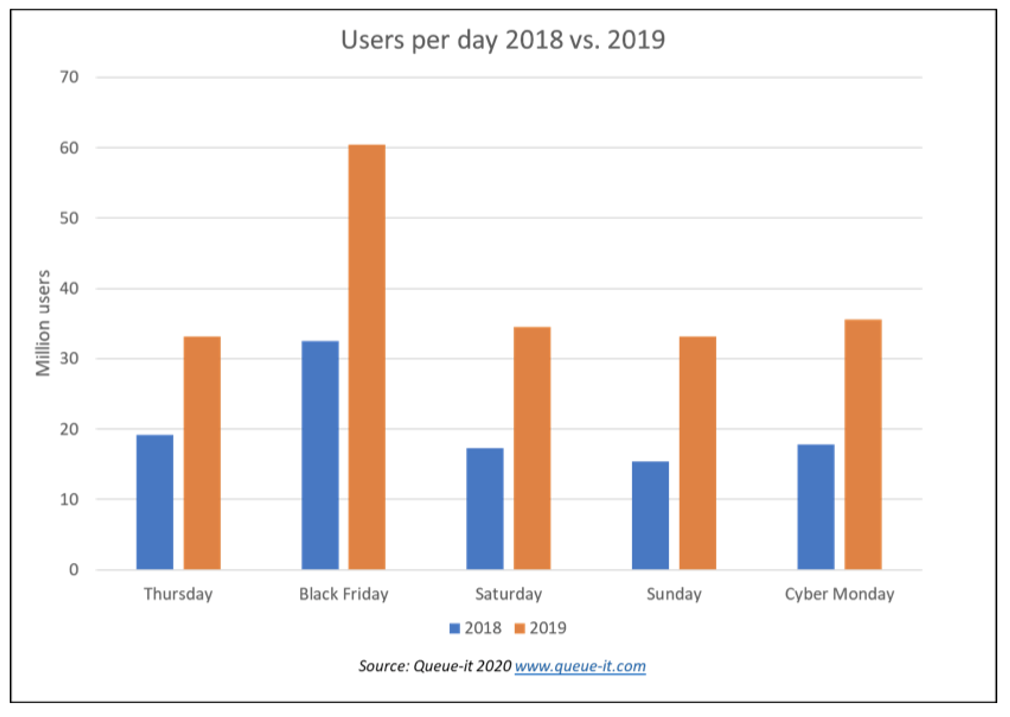 According to Econsultancy, visits to stores – actual, physical shops – rose in 2019 for the first time since 2016. Who would have predicted that? Not me, that’s for sure. I’ve been saying for years that Black Friday was becoming an increasingly online affair. What do I know?

Of course, having a virtual queue is not the same as having extra bandwidth for your e-commerce site. There will be some people who won’t want to be held in a waiting room. But this is where trust and expectations can really come into their own. If you are honest about what is happening, how long someone is likely to be waiting for (and why), people will be far more patient and tolerant.

Anything that decreases the risk of a gap opening up between expectation and reality can only be a good thing. That’s an outlook which is taking hold in the last mile too – being clear about when a parcel is going to be delivered, giving customers control of when and where something arrives if they need to make changes, sending notifications. These are all things that help maintain a level of trust.

My prediction is that these things will only grow in importance over the coming year. Trust me.

PrevPreviousConnected employees for a truly frictionless retail
NextIs the retail apocalypse a blessing in disguise?Next