Italian contract logistics trends for 2019: logistics on the hunt for IT

A hunt has been opened for professionals and startups that can bring the benefits of innovation into the world of deliveries.

IT and couriers? Until a few years ago the two things, especially in Italy, could not have seemed more distant. It was unavoidable, though, that the power of IT would break onto the logistics’ Babel Tower of paper, in an attempt to optimize processes unable to adapt to a present that has seen B2C replace B2B under the spotlight.

The data presented by the Contract Logistics Observatory “Gino Marchet” of the Politecnico di Milano, at the conference held last November 21st, reveal a sector in which a “big hunt” has been opened for professionals and startups that can bring the benefits of innovation into the world of deliveries.

From 2015 to 2019, 31 mergers and acquisitions (M&A) were registered at international level and 45 in Italy. In the first 10 months of 2019 the operations were 14: 9 in Italy and 5 abroad. Compared to previous years, in terms of value, the turnover of the acquired companies is growing even if the number of operations has dropped, this tells us that we’re dealing with medium-large companies. 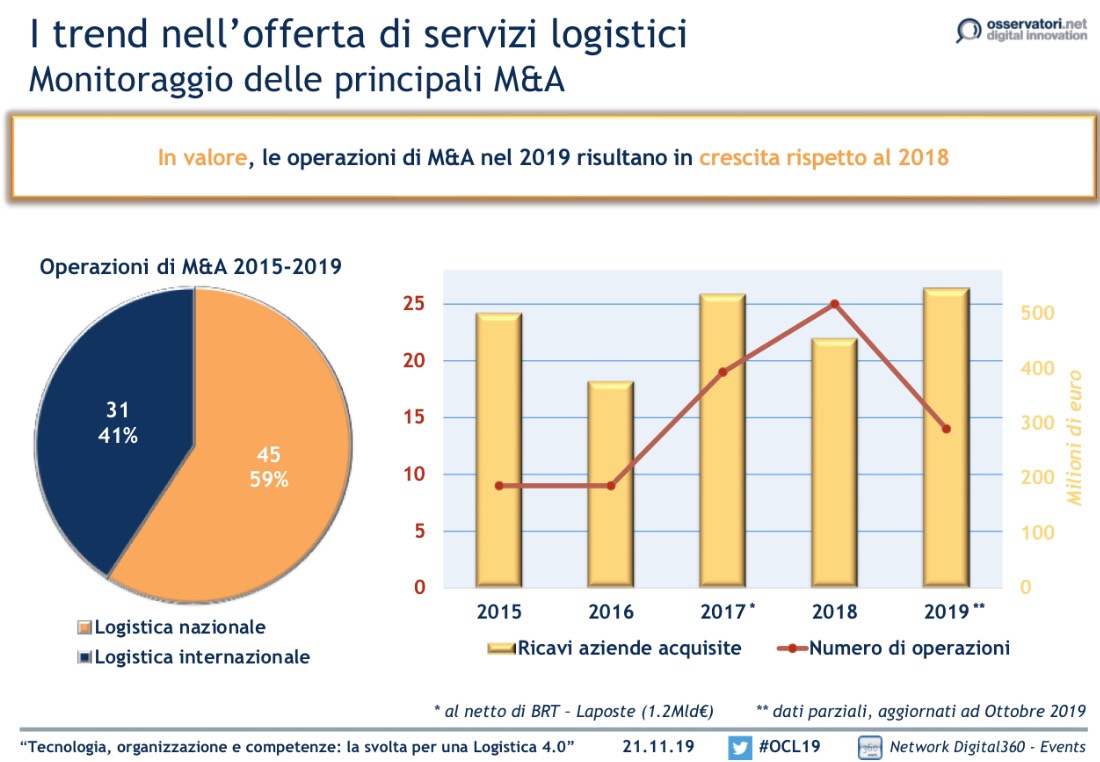 The reasons that led to the acquisitions are, in order of incidence: completion of the network; access to new sectors; outsourcing choices; offering of new services. These operations often involve players of different categories, overcoming traditional distinctions, especially at the Global Supply Chain’s level.

M&A transactions are recorded which directly concern technology supply companies, startups (GEFCO with ChronoTruck) or simple partnerships (DHL and Convoy). Only Amazon has done the opposite: a tech company who strengthened its logistics assets. In 2018, Italy’s Amazon Logistics achieved a total turnover of almost 500 million euros, becoming to all effects one of Italian logistics’ main entities.

Technology takes on an increasingly dominant role in value-creation and, to adequately address the 4.0 revolution, the evolution of IT is crucial. The average increase in the budget dedicated by logistics companies to IT over the past 5 years has increased from 32% to 42%. In terms of turnover, 20% of companies declare an IT budget of over 10%, 7% between 5 and 10%, 40% between 1 and 4%. Another determining factor is the number of people in the IT sector, growing for 25% of respondents with an average increase of 16%. 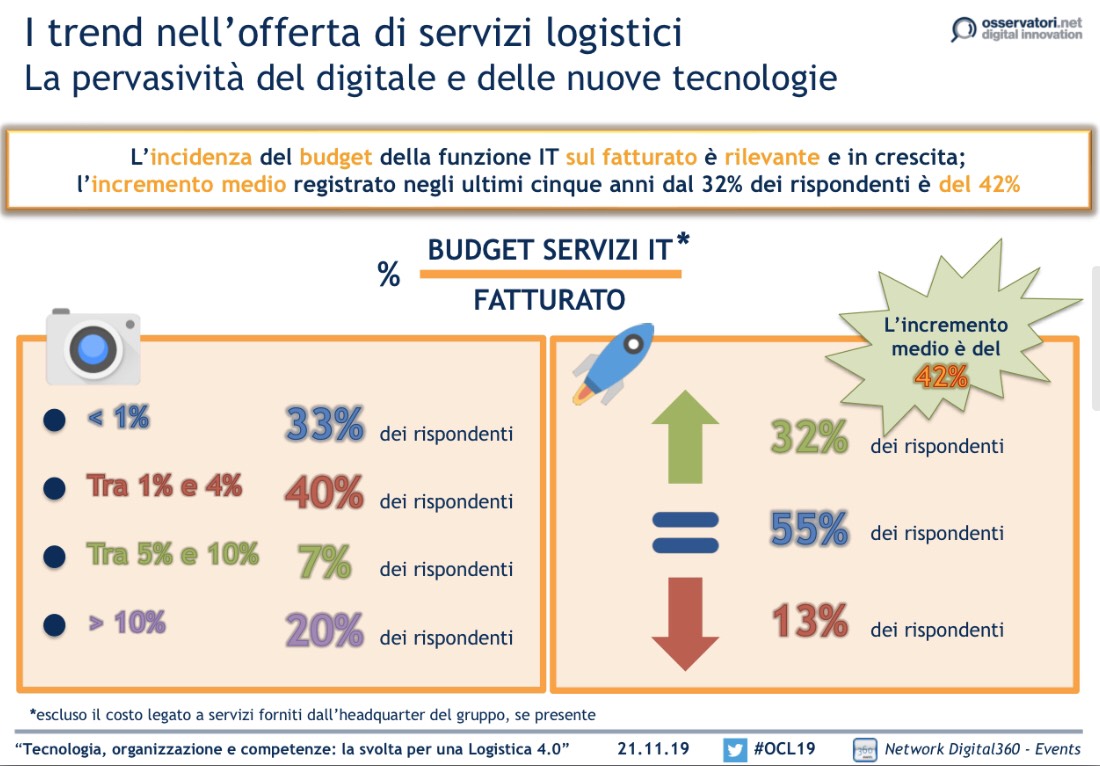 The tendency is to outsource software development and internalize the development of interfaces, so to encourage a more immediate integration of new customers.

However, increasing the involvement of IT resources reveals some critical issues:

– strong involvement of new staff in day by day operations

– difficulty transmitting IT sensitivity to other functions

– lack of IT skills in other functions

– lack of sensitivity on data collection and quality

– difficulty in finding new professionals on the market

– lack of involvement in the commercial relationship with the customer 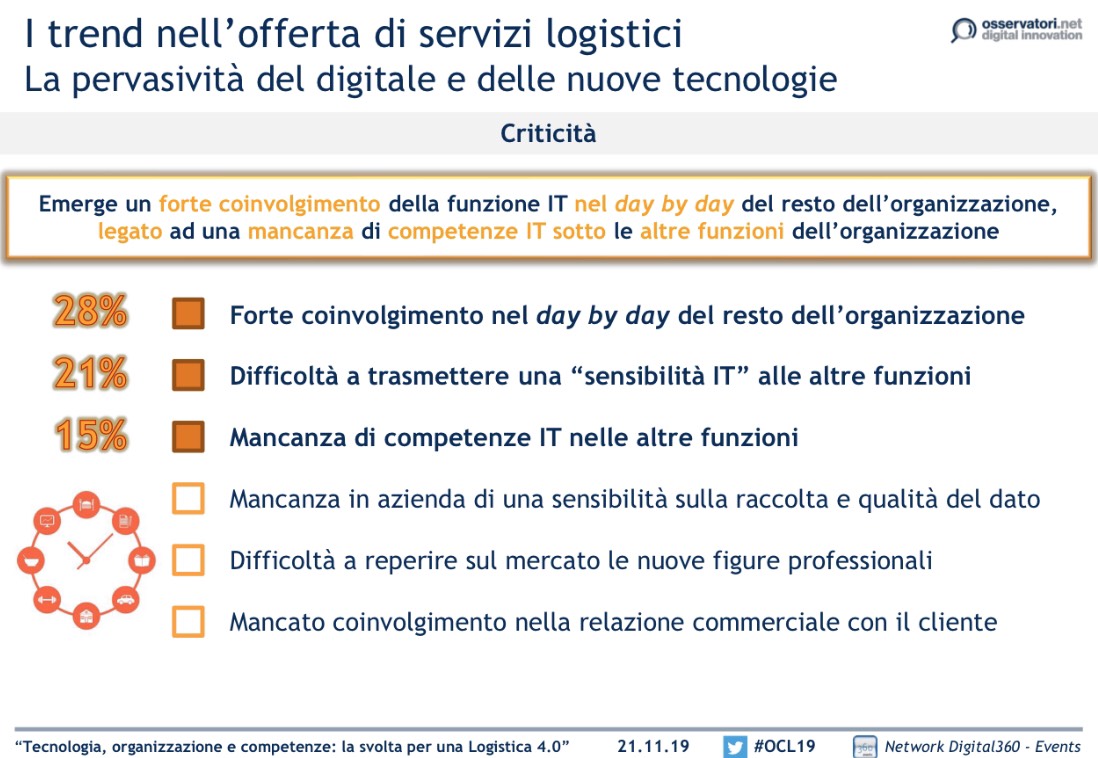 It is a new world, to live in which it will be necessary to reset a mentality that has operated unchanged for more than a century. The benefits, however, are such and many that even the most diehards will soon have to surrender.

PrevPreviousQuomi & Milkman: fresh ingredients in search of speed and time windows
Next2019 has been a tough year for UK retailersNext