Instant-deliveries and the startups providing them are doomed, says a new report from McKinsey & Co: Urban Delivery Report. Not every single one of them: prepared food deliveries seem to be sustainable, at least by a small group of already well-established companies.

So: what’s the reason behind this sobering analysis? Long story short: they’ll never become profitable, because they rely on venture capital to finance operations whose margins are too thin and not becoming fatter as density rises to acceptable levels.

“Although urban delivery start-ups are striking a chord with consumers, their rise is ultimately due to investors’ bets on a virtuous cycle. Namely, the success of the urban delivery market depends on scale at a level that is only possible with heavy up-front investment.” 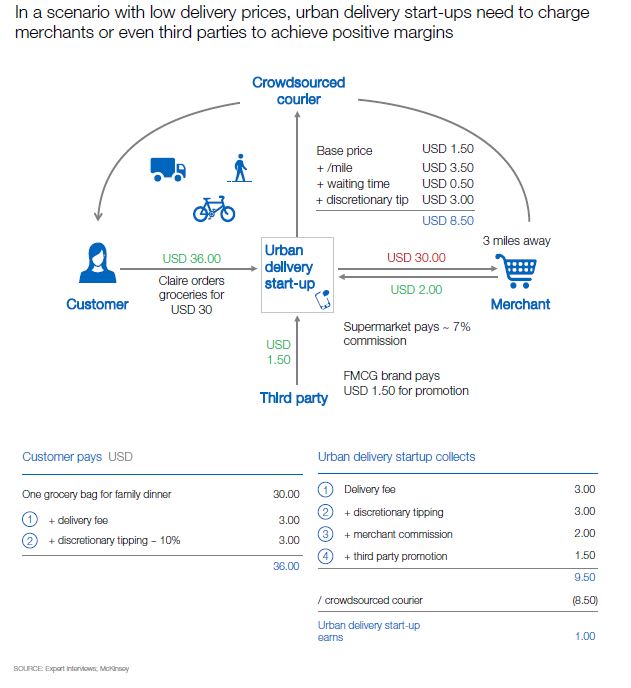 For non-food delivery providers: “a new hunting ground is needed, yet hard to come by. Markets like groceries or non-food retail do not offer the same rare combination of high gross margins and high urgency like hot food does. At average variable costs per delivery as high as USD 7 to 10, profitability will hence remain out of sight for these start-ups in the broader market – unless they reinvent themselves and address the limitations of their current instant delivery model.”

The right direction seems to be that mixed-demand whose virtues we supported on this blog more than year ago. “Moving from pure point-to-point delivery to more cost efficient network-based consolidation (and with it, from instant to same-day delivery) and adopting “old school” models of product warehousing and employment. For most new entrants, however, a shift of this magnitude would exceed their capabilities and budgets, and trying to make it happen would set them up for failure.”

This isn’t bad news for everybody as: “on the retail side, brick and mortar stores (not even pure e-tailers) stand to recapture ground from fast-growing pure e-tailers. They alone have the dense network of physical stores to support same day order fulfillment and delivery from “the city as a warehouse.” In logistics, incumbent parcel services, not start-ups, stand to gain at least 80 percent of the future same-day market. Only they have the critical capabilities today that retailers will seek, namely proven expertise in consolidated network operations, synergies with significant base volume, and the commercial capabilities and standing big-customer relationships to support such deals.” 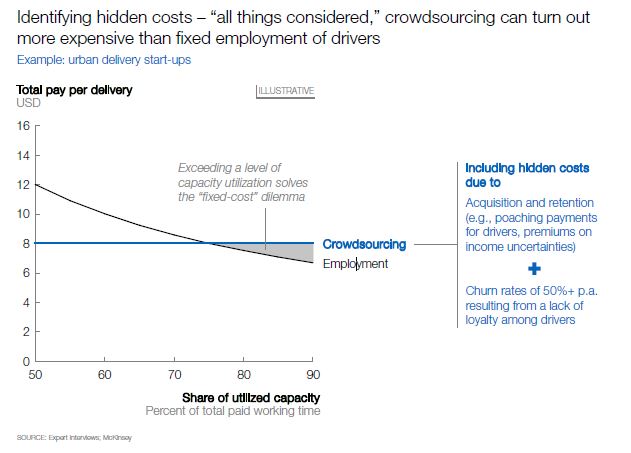 Yes: same-day, for McKinsey, is the future and remains firmly in the hands of more traditional companies, who have experience in consolidating their operations. “Other sources of revenue are needed in order to make largely unconsolidated delivery work. In a scenario in which we assume low consumer charges of just USD 3 (in line with what the typical consumer is willing to pay), urban delivery startups indeed need to charge multiple parties if they are to achieve positive margins.”

“Customers care about free, flexible, and fast, in that order. We believe that high-convenience offers like curbside pickup or narrow time windows can strike the right balance – instant demand for a lipstick, on the other hand, is rare.” An anonymous eCommerce Executive (of a US Cosmetics retailer) is quoted saying.